Going to show you some great stuff you are able to get when purchasing our Statistics Pro -service.

Statistics Pro only: longest streaks and current streak of having conceded a goal in game. See Ghana here record of 19 concecutive games and currently only 1 game streak of letting in a goal. Ivory Coast on the other hand has not conceded a goal in their last 2 games (conceded goal = -2). So a negative number here means the opposite. It is obvious on the over / under 2.5 goals streak. If team currently has 3 goals streak of over 2.5 total goals games, then it also has a -3 streak as under 2.5 goals games. You can actually customize this total goals limit: exactly 2 goals, 1.5, 3.0, anything. It can have negative number on both over and under side if the team currently has played exactly x goals game(s). For example if you choose limit of over / under 2 goals and both teams have played 1-1 score their previous games then it would be -1 on both over 2 total goals and under 2 total goals games because they have not played over nor under 2 goals games in their last 1 games.

Also just added couple of days ago: Special Statistics tab in every league page. This is from English Premier League (EPL):

If you click Score Stats -button you’ll get the following statistics: 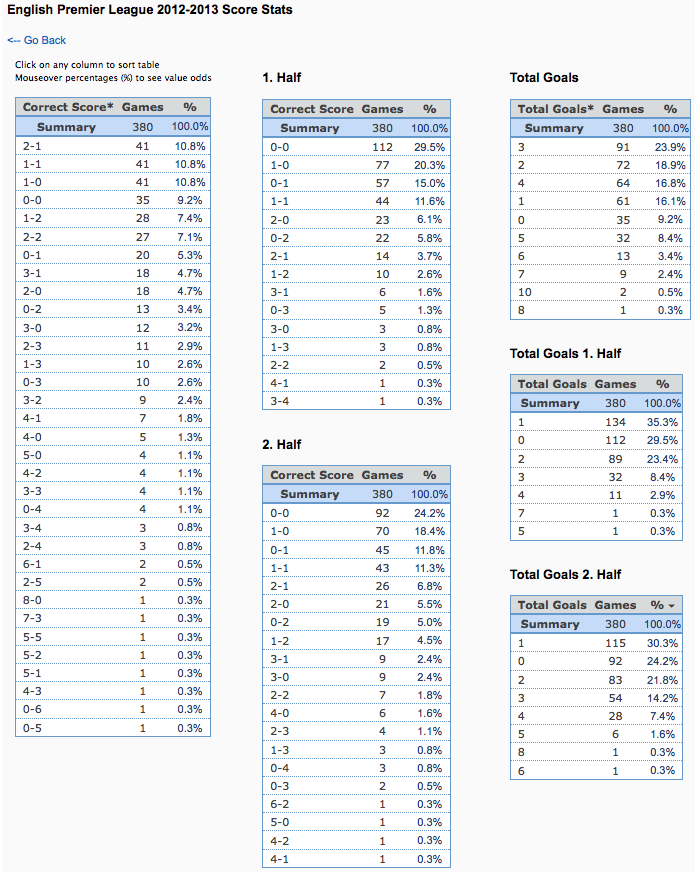 You can sort the columns by clicking it and if you put your mouse cursor over the percentage (%) value you’ll see percentage as value odds (for example 50.0% = 2.00 in decimal value odds, 1/1 UK, +100 in US odds). This actually works in all the percentages seen in league pages and subpages.

If you click Half Time / Full Time -button from the Special Statistics you’ll get this:

All the amazing data filtering that you can do for each team when comparing them, you’d better just try it yourself in this demo:

Some examples: “show me games of team A vs team B in NHL playoffs where team A was heavy favorite with 1×2 odds under 1.50 and team B underdog with odds 3.00+ and also show me all these games results and statistics as -1.5 handicap for the team A!”

“Show me the 1st half 1×2% distribution where Arsenal was <1.40 odds heavy favorite at home and Stoke 4.50+ underdog at away and show me the current 1st half 1×2 odds comparison too!”

Basketball example: “show me how New York Knicks has played as heavy favorite with -9.5 handicap!”

Live betting example: “show me all the games where Arsenal was leading 1-0 and Stoke down 0-1 after 1st half” – you can mix any of the stats data filtering totally as you wish! 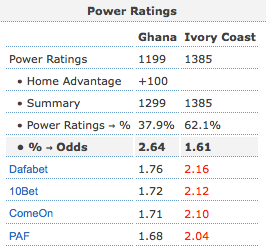 Odds comparison is also available in UK and US odds. Just register and login to our site and click Customize Statistics.

We wish to thank all those paying customers enabling us to develop all these cool stuff for you! We may now have the biggest sports and betting website in the world (by the size and uniqueness of the content). This is available in 12 languages. Please contact us if you can help us in new or existing translations or any other co-operation.

Our content may change (usually improve) that has been shown here. See our Terms of Use here.

Our ratings are currently calculated from games played after 1.1.2000

In football our ratings are similar to World Football Elo Ratings but we have tuned up the formula. For example when goal difference is low or game is tied and we have shots on goal statistics available for the game, we’ll then analyze the shots ratio to have some effect on the ratings. For example if a game was tied 1-1 but home team outshoot away team by 10-2 you might say the home team was the better team despite the result.

Some examples how ratings are adjusted after each game

In the beginning each team has starting rating of 1000 points. After each game played the sum of points change is 0: if home team gets +20 points then away team gets -20 pts deducted. Amount is always based on the weight/importance of the tournament: in friendlies teams get much less points than in World Cup finals.

Two equal teams meet: winner gets some decent points and loser looses the same amount. Example +20 / -20.
Heavy favorite (much higher rating) wins by few goals: gets only few points because it was very expected result. Your points rises very slowly by beating much poorer teams than you. Example +3 / -3.
Heavy favorite ties a game: favorite loses small amount of points because it was expected that the team should win, the opponent get some points. Example -3 / +3 points.
Heavy favorite loses a game: loses lots of rating points, winner gets lots of points. Example -40 / +40.

Why are Power Ratings better than winning percentage or league table?

These are just rough examples for you to get the idea.

Finland vs Sweden Power Ratings: 1043 – 1087, ratings difference 44 and by looking at the table above you can see that this game should be about Finland 46% winning chance and Sweden 54%. Note that home advantage is usually about 100 points so 46%-54% would be only at neutral venue.

It is not always about how many games you have won but rather which teams and by how many goals that tells more about your true Power. But still remember these are only computer calculated estimations and does not take account real world situations like injuries, weather etc. Also note Power Ratings being much less accurate when teams have a big difference between number of games played and/or quality/diversity of tournaments where they have played.

Click here to buy Statistics Pro from our web store 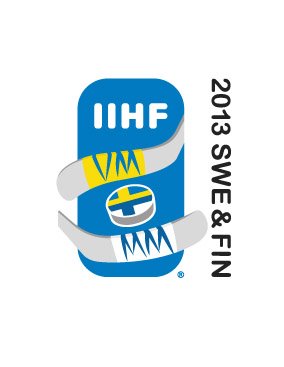 Finland and Sweden will co-host the Ice Hockey World Championship for the second year in a row 3.-19.5.2013. AnnaBet offers you Power Ratings (see our guide here): 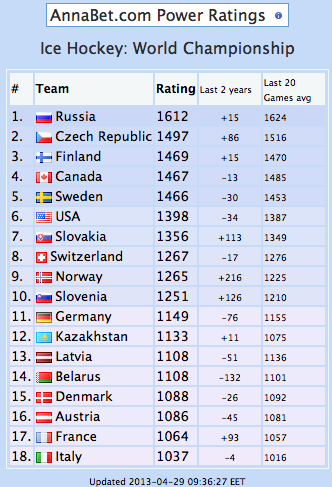 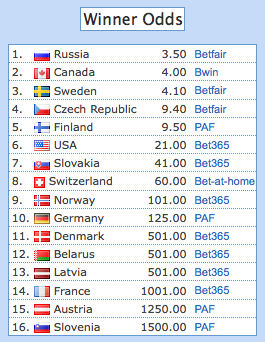 Twitter box shows what is being discussed right now: 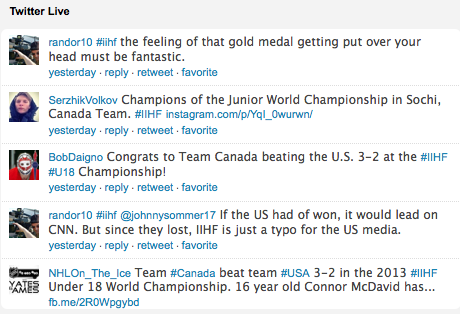 And all the best statistics for upcoming games.

By using our fantastic Statistics Pro -service. We noticed that Finnish SM-liiga team Jokerit from Helsinki haven’t won their last 10 away games in SM-liiga playoffs outside Helsinki. Only wins as an away team has been against local team HIFK. Here is a screenshot of our stats filter (Statistics Pro) showing only playoffs games in the head-to-head statistics: 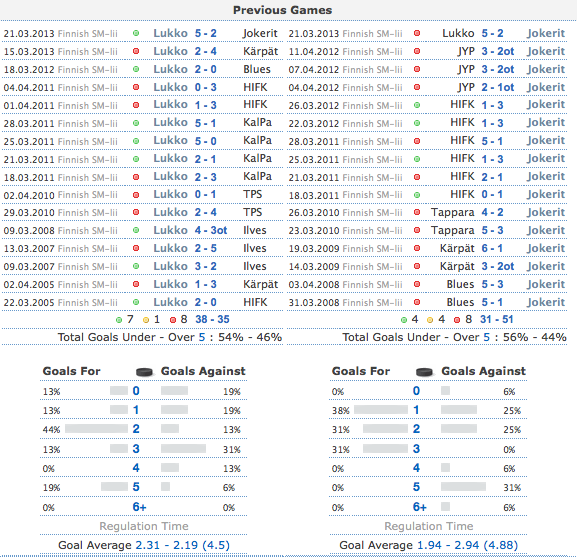 Last time Lukko’s odds was 3.77 at PinnacleSports and they won 5-2. At the time of writing this article the best odds for tonight’s Lukko – Jokerit game are:

Of course you can do much more than showing just playoffs games. You can get statistics only for certain period (first, second, third or all overtime games), or filter games by 1×2 odds. Choose small odds to see games where team has been clear favorite and big odds when playing as clear underdog. When you choose to view statistics for 1. period only, you’ll also see odds comparison for 1. period bets! In soccer you’ll also get odds for 2nd half too.

Edit: Game result was Lukko – Jokerit 2-1 so this was Jokerit’s 11th loss at away from home town in playoffs! Nice winning odds for “underdog” Lukko again (3.44).